I am a scholar of Buddhism with a particular regional focus on Tibet and the Himalayas (Tibet, Bhutan, Nepal). I am an Assistant Professor of Religion at New College of Florida, where I teach courses on Buddhism, Tibetan and Himalayan Buddhism, Buddhist Contemplative Systems, Hinduism, and Asian Religions in general. I am also interested in the intersection of religion and popular culture and write about it in a blog.

I am currently working on a research project that explores the changes in the monastic curriculum that have taken place in the Himalayan Kingdom of Bhutan over the last few decades. This project is a collaboration with Prof. Dorji Gyeltshen, of the Jigme Singye Wangchuck School of Law (JSWSL). In order to work on this project, we are visiting monastic institutions in Bhutan, both Nyingma (such as Tamzhing Lhündrup Monastery) and Drukpa Kagyu (such as Tango University), to see if there have been significant changes (in texts used, in what the monks learn, in pedagogical techniques, etc.), and what those changes are. We are also exploring this issue in the larger context of the curricular changes that have occurred all throughout the Buddhist world in the 20th century (including Tibet, China, and Taiwan). The first research trip for this project took place during the summer of 2018. 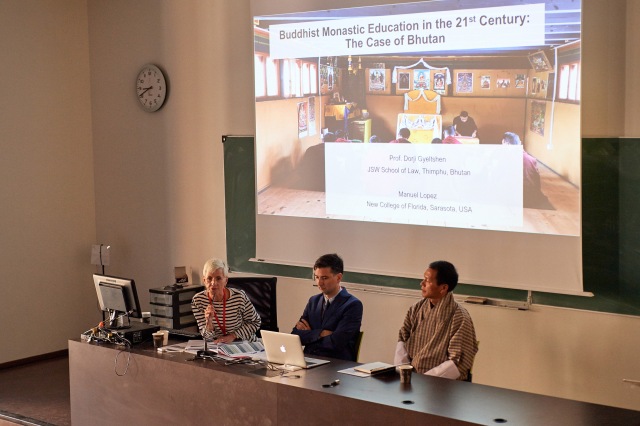 I am also working on a book project under the title A Light in the Darkness: Meditation and the Construction of Tibetan Buddhism, that explores the diversity of Buddhist contemplative practices popular across Asia around the turn of the first millennia (10th century) through the life and works of the Tibetan scholar Nupchen Sangyé Yeshé. His biography presents a complex and fascinating figure (pious, but also willing to resort to violence if necessary in order to protect Buddhism) who traveled tirelessly across the continent (Nepal, India, Gilgit) in search of Buddhist teachings.

Finally,  I have also been working on a research project under the working title From Suffering to Happiness: Buddhism and its transformations in the West that explores the evolution on the perception and interpretation of Buddhism in the West (from suffering to happiness) beginning with German philosopher Arthur Schopenhauer’s pessimistic presentation of the tradition in his 1818 work The World as Will and Representation, to the radically different presentation of the tradition in the last two decades in works such as Dalai Lama’s 1998 book The Art of Happiness and Thich Nhat Hanh’s 2009 Happiness: Essential Mindfulness Practices. Has Buddhism changed? Or is the West reinterpreting the Buddhist tradition to suit a different existential outlook on human nature? What is the role of some Buddhist figures in this transformation? Are figures like the Dalai Lama and Thich Nhat Hanh simply applying the old Buddhist practice of Skillful Means (Skt. upāya) in their explanation of Buddhism to a Western audience, or are they dramatically changing the nature of the Buddhist doctrine as its being introduced in the West? My project explores these questions while questioning our definitions a Buddhism in particular, and religion in general.

I completed my undergraduate studies at the University Pompey Fabra (UPF) in Barcelona, Spain and my graduate work at the University of Virginia. I also have extensive experience studying in Asia. Between 1999 and 2001, I studied Tibetan and Chinese as well as Buddhism and Tibetan literature at Northwest Minorities University in Lanzhou (Gansu Province), and at Tibet University, in Lhasa (Tibetan Autonomous Region). In 2013 I studied and did field research for my dissertation at Minzu University of China. Between 2003 and 2009 I also worked as director and lecturer of the SIT Study Abroad Tibetan and Himalayan Studies Program, based in Kathmandu, Nepal, which allowed me to experience and study the rich diversity of the religious traditions across the Himalayas, as I lived, worked, and traveled in Northern India (Dharamsala), Nepal, Bhutan, and Tibet itself.

My complete CV can be downloaded here: Manuel A Lopez CV.